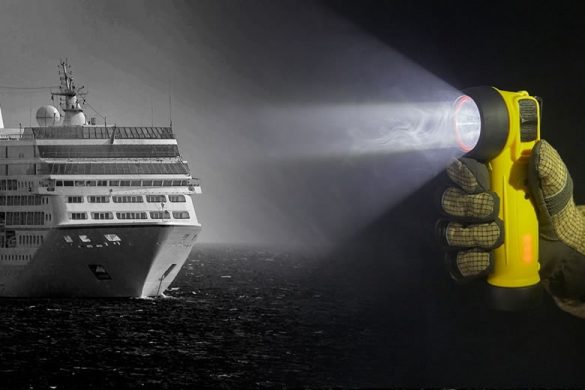 Wolf Rechargeable LED Safety Torches are used by Fire Fighting Teams on some of the World’s largest cruise liners.

Fire is the major safety threat on board cruise liners for both passengers and crew, and for this reason cruise lines hire professional firefighters to lead and coordinate their ships’ fire fighting teams.

Teams are usually comprised of up to 4 firefighting groups, with as many as 10 extensively trained members in each group – with group members coming from any department of the ship.

In addition to these extensively trained fire teams, other crew members learn basic fire fighting techniques to help control any situation that may arise until the dedicated fire team arrives.

Fire fighters on board some of the world’s largest cruise ships use and love their Wolf rechargeable safety torches. We know because we asked them.

They love that every time they need to use the torch they know they’ll find it in its docking station mounted on the bulkhead – fully charged and ready for use, no matter how long it’s been sitting in the charger!

They love that its powerful and clear LED light is much brighter than what they were previously used to. They love its long beam (over 250 metres), and that it’s compact, light weight, tough and reliable.

But they don’t miss having to change the batteries – at all.