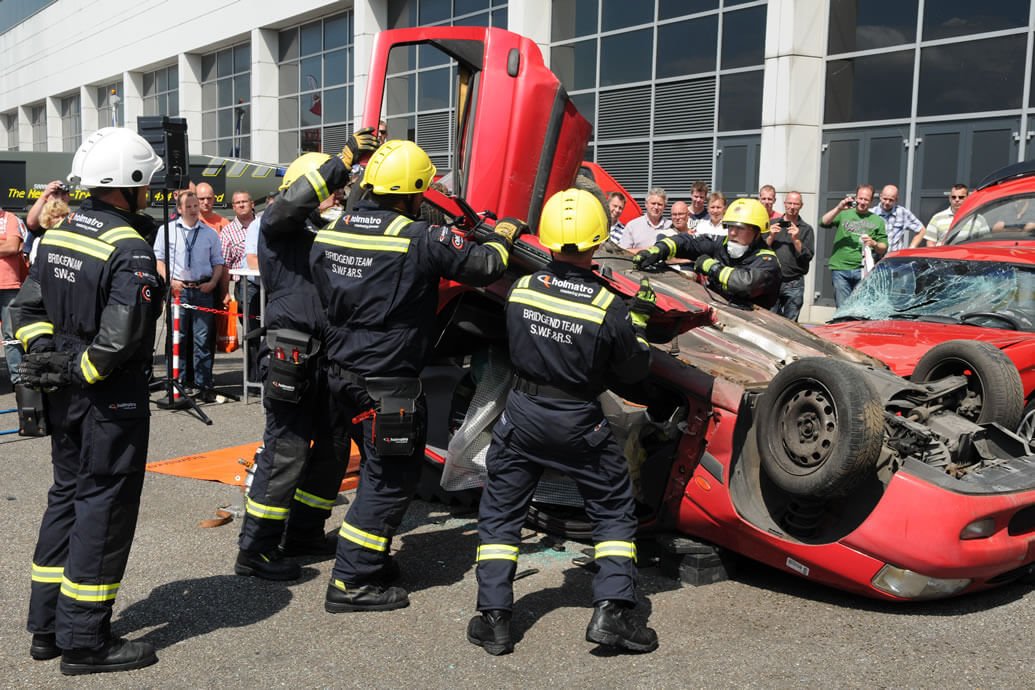 Having been involved with the fire service for 25 years, mostly as a firefighter and the last 15 in sales and vehicle Extrication Training, I have come to realize there are no absolutes. I have seen fire departments equipped at the most basic level ( jacks and pry bars) to those with the most organized, highly equipped heavy rescue trucks on the planet. And the one equalizing factor they both share is training.

The amount of tools in a box does not always reflect the skill of a rescuer. Don’t get me wrong, I have been lucky enough to work with some really skilled people. From common sense farm boys in little towns that can dissect a crashed car with minimal equipment, to some of the most technically trained teams in the world. It is the folks lower down on the list that I want to address.

In my travels, the most common topic of discussion centers on “advanced extrication training”. Everyone wants to train for that “what if” incident. Rightly so, those incidents cause anxiety for anyone. So often I see rescuers struggle with door removal and dash displacements. Metal is ripped and torn, lower A-posts are mangled while trying to lift the dash or find secure footing and correct angles for rams – all which cause extended extrication times. During roof removals, failure to complete cuts or cutting into hardened attachment points for safety restraints can lead to problems. And none of this reflects on the true abilities of the teams, to me it is more related to the type of training they receive.

How Extrication Training is Done by Others

Let’s think about sports. Baseball players practice at higher levels, daily. They do not practice for triple plays and home runs. They practice getting on base and for defense, getting the guy out at first, over and over. In football, the same route is run repeatedly until the athlete can do it in their sleep. Now, on to something a little more serious. The military performs basic maneuvers all day and into the night – with mind numbing repetition. They do not train for the big battle; they train for the small elements that make up the operation.

Train to Not Fail

In both examples, when it is game day, or time for the attack, or defending the post, all those small elements come together, almost without thought, to create success. The key to that success is repetition. And the fact that they do not train for success as much as they train to “not fail”. My father was a military man, he did not coin the phrase but it was definitely etched in my brain. “Don’t practice until you get it right, practice until you never get it wrong.” Try applying that school of thought to extrication. It is not glamorous or the most fun but it is effective.

Repetition is the Key

I am 100% sure that I am not the only one in my line of work that can look at a vehicle and in a few seconds evaluate the damage, decide where to place the spreader and remove a door with a very minimal amount tool work. As much as my ego argues, it is not skill. I am no better than the folks I am training. I just do it repeatedly. The same goes for displacing a dash with a ram. I call it “the ability to read the metal”. I run into many first responders with this ability. Knowing where to push, anticipating the reaction of the metal, stopping spreads before compromising push points, choosing correct angles for spreads or pushes with rams. This knowledge comes from repetition. Let’s be honest, it is usually the “old guy” with the awesome mustache on the crew that can do this. Sadly, that generation is getting fewer and fewer but we can replace their knowledge and skillset with repetition in training.

Back to the Basics

So many times I hear, “we have a limited supply of vehicles for training purposes,” or “we do not have the budget for the overtime needed to train.” Instead of using valuable training assets on the “what ifs” (stacking cars, cutting them in half, cracking them open or crawling through the trunk to reach the brake pedal), why not take those vehicles and simply remove the doors, move the dash and remove the roof, repeatedly. Do this at a company or station level, at the local salvage yard or the wrecker facility in your district – one vehicle at a time. Now you have affordable training without needing overtime pay. And make it fun. Don’t go for the fastest time – that can lead to recklessness. Compete on things like the least number of spreads, least amount of tool repositioning, etc. Try for dash displacement maneuvers with the least deformation of the lower A post or best anchor point for the ram.

In the scenarios created with the cars piled presenting technical challenges, we always end up doing the same things, removing the roof and/or doors for access and if needed displacing the dash. Focus can easily be lost in longer training sessions due to fatigue and frustration caused by the scenario. Yes, I hear the replies now that there will be fatigue and frustration on real world scenes which create difficulty that basic training does not address. That is just like battle stress or the bases loaded, three balls and two strikes situation in the ball game. However, with the basic skills it is much easier to stop, take a breath and focus. Training should be about learning the skills until they are instinctive, until “you don’t get them wrong”.

The bottom line is: train for experience, train for what you do most frequently, and train until it becomes second nature. And when the big battle comes, all the elements will be there, for you to apply for success.