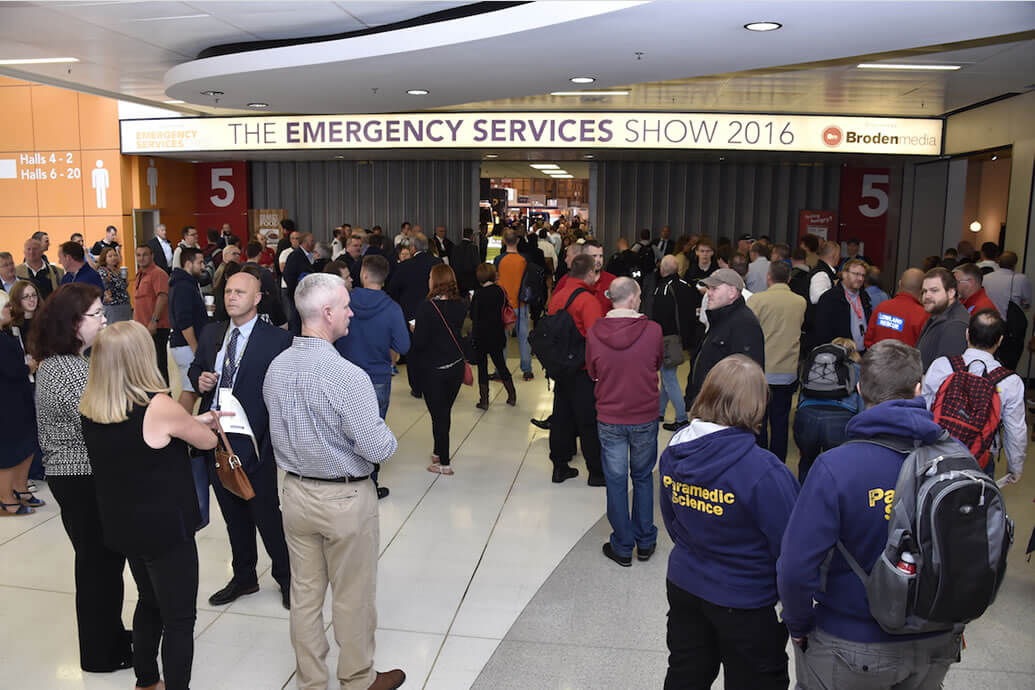 The Emergency Services Show 2016 closed its doors last week after another successful show which was held for the first time in Hall 5 at the NEC, in Birmingham, UK.

The Emergency Services Show was the biggest in its 10-year history and provided a fascinating insight to the UK’s fast-evolving emergency services industry. The move to the larger Hall 5 at the NEC enabled the organisers to offer more free learning and networking opportunities than ever before, with over 80 free seminar sessions, numerous CPD workshops and skills stations, live demonstrations and water rescue displays on the Pendigo Lake directly outside the exhibition hall.

Angus Fire exhibited its brand new CoolFire firefighting attack extinguishing system.  The CoolFire cuts through building materials using a mixture of cutting abrasive and water to gain access to the fire without introducing oxygen into it.

A record number of 6,433 visitors were attracted which included a 45 per cent increase in overseas visitors. Exhibiting at the event, Alex Creamer, Head of Business Development at Steroplast Healthcare Ltd said: “It’s a great gateway to the emergency services sector. You are covering everything from coastguards to the police to the military. There’s a wide range of buyers here including emergency services from abroad.”

The event broke new ground with features dedicated to drones and ICT innovation, and a new “show within a show” which showcased the work of the fire and rescue services in the areas of health, wellbeing and prevention for the first time. Supported by the Fire Kills campaign and Chief Fire Officers Association (CFOA), Home Safety 2016 comprised a free two-day seminar programme and a dedicated exhibition showcasing specialist equipment for the safe home.

Over 20 per cent of the 460 exhibition stands were taken by new exhibitors. These included WASP Rescue. The Warning Alarm for Stability Protection (WASP) was most recently deployed on the high profile bridge collapse on the M20 to monitor the remaining pier to ensure rescue workers were protected during the recovery and clean up phase. Co-founder of WASP Rescue, Matt Keogh said: “This was our first ever show. There were a lot of people there who need this equipment and I could spend six months travelling the country to speak to all the people I have spoken to in the last two days – fire services from all over the UK… It’s money well spent in my opinion.”

Another company making its UK debut was Dechoker. Director of European Operations, Alan Walton said: “The Emergency Services Show was an outstanding success for us at Dechoker Europe Ltd and our distributors, Pro-Trainings Europe and Community Heartbeat Trust. The level of interest in our life-saving Dechoker Anti-Choking Device was phenomenal! We will certainly be present at the 2017 show.”

Bristol Uniforms again displayed their extensive range of firefighting and rescue PPE and clothing at ESS 2016.

Successful partnerships between the emergency services and other agencies were showcased within the seminar programmes and on the exhibition stands. In the Learning Zone (curated and inspired by JESIP and the National Operational Guidance Programme) senior figures from the fire, police and ambulance services shared their experiences of co-responding to incidents including the Bosley Mill fire, Christmas 2015 floods and Shoreham air crash. Meanwhile at the entrance to the show, Excelerate handed over a joint command unit to Northamptonshire Police and Fire and Rescue Service. The new command unit will provide a base for commanders when in attendance at large scale or major incidents. All of Excelerate’s integrated technologies have been designed to facilitate joint working, while enhancing operational efficiency and further supporting resilience for Northamptonshire’s incident response capability. With the Government’s drive towards greater collaboration and sharing of resources across the emergency services, this new joint command unit is at the forefront of this transition.

Scott Safety had on display the first ever in-mask thermal imaging intelligence system called Scott Sight. This ground-breaking system brings the future of firefighting into clear view for those on the front line and is set to revolutionise the industry.

In the ICT Innovation Theatre, the session on the Emergency Services Mobile Communications Programme (ESMCP) presented by the Home Office, Motorola and EE attracted a great deal of interest. ESMCP is the programme to replace Airwave and provide integrated critical voice and broadband data services for the three emergency services.

David Brown, Event Director for The Emergency Services Show said: “The Emergency Services Show represents the UK’s largest multi-agency gathering, and it continues to grow. This year’s event perfectly captured the spirit of collaboration between the emergency services and the vital role played by new technologies. We were delighted with the way in which our new features and exhibitors were received and are grateful for the support of the many organisations and sponsors who have helped us to ensure the show evolves each year. We are already brimming with ideas of how we can further build on this for next year’s event.”

The Emergency Services Show will return to Hall 5 at the NEC from 20th to 21st September 2017. Entry to the exhibition and seminars and parking will continue to be free of charge. More details of the 2017 event will be published on www.emergencyuk.com

With so many great highlights including the Drone Zone, live demonstrations, and workshops, the Fire Product Search team would like to share some of the highlights.