In May 2013, LEADER has received a visit from their partner and distributor in Switzerland TAILLENS & FILS Ltd to validate the delivery of three additional EASY 4000 in skid version. A first fan was delivered at the end of 2012.

The tests of each of these devices have proved very satisfactory. Indeed, the main advantage of these large flow fans, is their capacity to deliver an estimated full airflow in normal operating conditions up to 400 000 m3/h for effective smoke extraction for large volumes such as warehouse or tunnels but also large industrial buildings, airplanes on the ground, airport terminals or stadiums 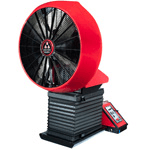 Furthermore, their extremely reduced weight gives them an unrivalled performance/manoeuvrability ratio in operation because only one person can set up the large flow fan in the trailer version.

The work of R & D provided on these fans has been rewarded by this important order. In addition, the manufacturing team is also proud to have been able to meet tight deadlines given.

Other orders for these fans have been received since and our manufacturing team is already underway to fulfill them!