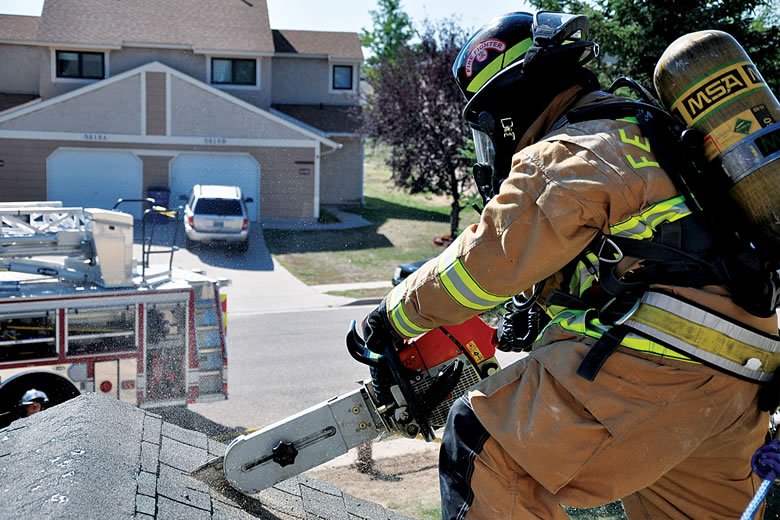 Openings are an essential part of the work with fire ventilation. We will consider here the methods of Creating Openings for Fire Ventilation where openings are made manually by means of hand tools. Explosive cutting frames and water cutting are methods that require special training and special equipment, and will only be considered in general terms.

There are no general methods that can be applied for creating openings in roofs during fi re ventilation in a fire and rescue operation (with the exception of explosive cutting frames and water cutting, which can be used in several different situations). On the other hand there are a large number of suitable tools that can be used, and certain gui- delines can be given for creating openings in several common types of roof structures.

There are several factors that infl uence how successful ventilation can be implemented by creating openings in a roof. Examples of such factors are:

The roof structure influences the tactics during the fire and rescue operation. It also influences the positioning and size of the openings, the time for problems with the work of making the openings, including the safety precautions for the crew and the need for special tools. If the fire fighting crew has the right equipment and the roof structure permits an opening to be made quickly, the fire gases and fumes can in all probability be vented out enough to simplify the work of fire fighters.

On the following pages there is a description of the common tools used to create openings in the roof, and examples of openings made in different roof structures commonly found in Sweden. Unconventional measures, such as for example demolishing walls/roofs with the help of excavators or crane lorries are not considered. In certain cases these methods may very well provide suitable solutions to tactical problems, but they should be used with a certain degree of caution.

Tools for creating openings in the roof

The tools shown are generally available at the fire and rescue and are used for the purpose of creating openings. They are divided up into electric motor powered tools, internal combustion engine tools, hand tools, and special equipment.

Tools powered by engines can be used regardless of external power sources and produce a comparatively large output. They are, however, relatively heavy and the engine power can be affected by the fire gases when creating openings. In the event of an intense development of fi re gases the engine may at the worst stop. Engine powered tools should be used together with proper safety equipment. It is important to know how the tools should be used, among other things because of the relatively large output and their weight.

The cutting machine with twin-head rotating cutting discs cuts with two metal blades that are fi tted beside each other and rotate in different directions. It can cut through stainless steel, cast iron and , wood, and certain plastics etc. On the other hand it cannot be used for glass, stone, concrete or ceramics. The maximum cutting depth is 60 –65 mm. The electric cutting machine has a relatively minor practical application for creating openings in the roof, primarily because of its limited power. It can be fi tted with different blades, and is mainly used for cutting metal parts in different roof structures, for example, metal rods and sheet metal hatches etc.

The tiger saw works with a reciprocating action. It can be used to saw in wood, plasterboard and metal. For the purpose of cutting sheet metal the cutting speed is slower than that of rotary tools, but the noise level is lower and it produces less sparks. The saw blade is approximately 15 cm long. The thicker the sheet metal, the lower the sawing speed.

The circular saw is used to saw wood and plasterboard. It is effective and relatively easy to carry during an operation. It can be used for both boarding and supporting parts in wooden roof structures. The sawing depth varies from 50–70 mm, depending on the manufacture.

A special machine is used as a screwdriver, or a battery operated drilling machine is with screwdriver bits or nut sleeve. The screwdriver is useful when it is necessary to remove sheet metal that has been screwed on. The chainsaw is handy for creating openings in wooden structures. Its function can be impaired by nails and metal in the roof structure. When creating openings in wooden roofs covered with tarred roof roofing felt, the blade can stick because of the tar.

The power cutter is a heavy-duty tool that can be fitted with different blades, depending on what is to be cut. Users of power cutters, in similarity with other power tools, must be knowledgeable of its correct usage to ensure safety and efficiency. It should be run at full speed and allowed to eat its way through the material without being forced.

Explosive cutting frames are mainly used to create openings in roofs with folded metal sheeting on tongue and grooved boarding. The blasting frame consists of a rigid cellular plastic frame, which can be mounted together with other frames to enable the blasting of larger openings. The frame can be carried by one person and lifted through standard roof hatches (width 0.60 m). An explosive strip of a plastic explosive is placed in the frame with a directional explosive effect, a copper material that cuts through the roof, foam plastic that holds the component parts together, and tape for adhesion to the underlayer.

Hydraulic powered eccentric cutting machines have the large advantage that the blade works eccentrically, i.e. the driving does not take place in the centre of the blade. The blade can therefore work in material with a depth greater than the radius of the blade (typical working depth approx. 25 cm). It can work in most materials. The disadvantage of the machine is that it requires hydraulic power by means of a separate hydraulic unit, and that it requires cooling.

Water cutting involves using water at high pressure to cut an opening in a structure. The pressure can vary, depending on the equipment, from 200 to 300 bar. The water flow normally varies from 25 l/min. to 50 l/min. An abrasive additive (cutting agent) is often needed to cut through hard materials (roof materials etc.). A cooling and suppression effect is also achieved in conjunction with making an opening. Equipment for water cutting can normally cut through all the materials commonly found.