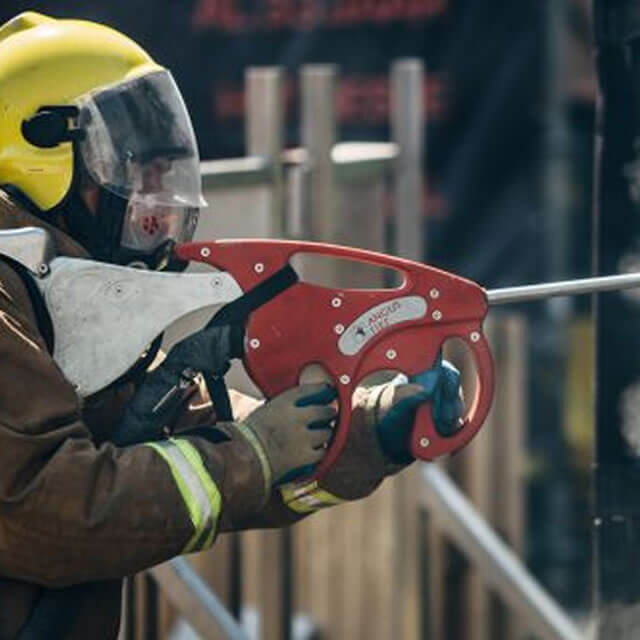 When both the Water and Abrasive triggers on the lance are pulled, abrasive is mixed with water [in the Command Module] to produce a high pressure abrasive waterjet which penetrates through the exterior of the structure and into the fire zone.

The Lance is the final delivery and command component of the CoolFire system.  It is connected to the Hose/Umbilical through which it is supplied with water and electrical power and back through which it sends commands.

The Lance is an integrated piece of handheld equipment that delivers the High Pressure (300 Bar) water, with abrasive added when required, to the surface to be penetrated and through which a fine water mist.  The Lance is also the point from which the firefighter sends out commands to the rest of the CoolFire system to supply just water or water and abrasive.

The Command Module sits between the HP (300 Bar) Pump and the Hose Reel and Umbilical to the Lance.  Its role is to house and add abrasive to the water flow when required and to receive and send various commands to/from the HP Pump (and Engines when fitted) and the Lance.

The Hose Reel sits between the Command Module and the Lance. Its role is to receive HP water (with or without abrasive) along with electrical signals to/from the lance and transfer them into the Hose/Umbilical. It also provides storage for the Hose/Umbilical.

The hose reel has a ‘slip ring’ incorporated into it to allow the transfer of the electrical signals between the Lance and Command Module to pass backwards and forwards.