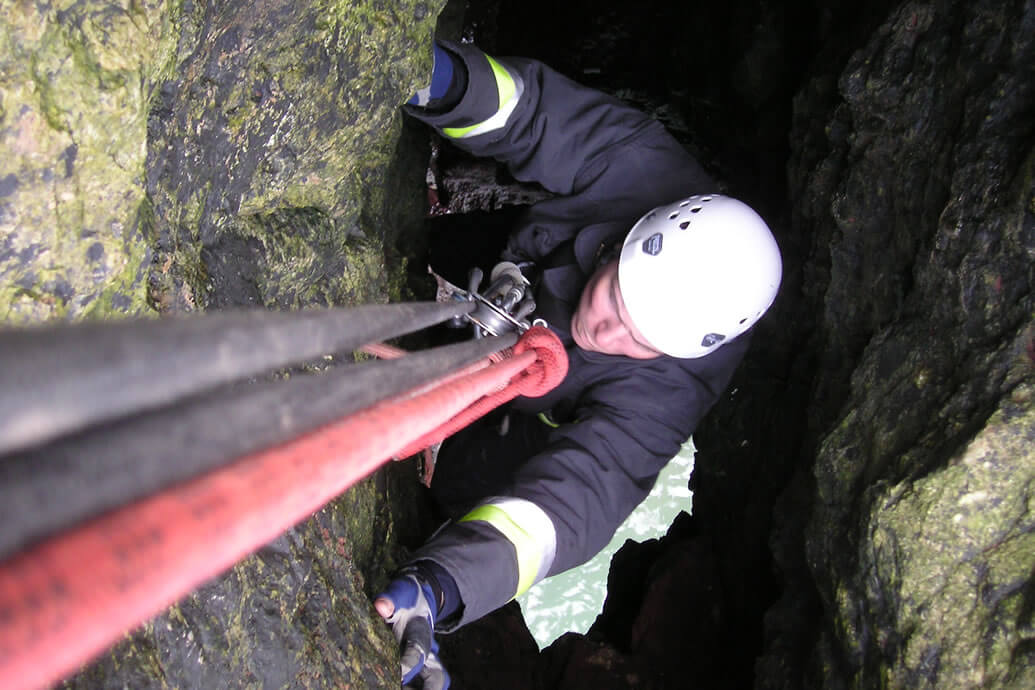 Even those of use with a less than Newtonian understanding of gravity all tend to agree that “it’s not the falling – it’s the stopping” that hurts. Perhaps we should ….stop for a few moments, and consider deceleration and the potentially baffling world of personal safety connectors in general.

The variety of available products increases all the time adding to the complexity of choice, whilst the developments in gear testing throw up new elements to the equation.

It would be great if we could just connect ourselves to anchorages with a strong bit of cable, rope or webbing sling. Unfortunately the stronger things are, the less dynamism they possess, so the falling operator stops – and promptly snaps! (Or as recent tests have shown, they may put huge shock loads on the anchorage).

Cumbersome though they are – fall arrest lanyards are the equipment of choice for anyone in any doubt as to the consequence of a fall (having said which their ingenious one-use-only dynamism will, whilst decelerating you effectively fail to stop you colliding with any surrounding structures!)

Their unzipping stitch-packs prevent a “snap” so long as operators understand all conceivable users, and miss-uses. (Their not confined to industry – thousands are used every day on the rigid rungs of alpine “via ferrata’s” – so interest in their refinements will be ongoing) 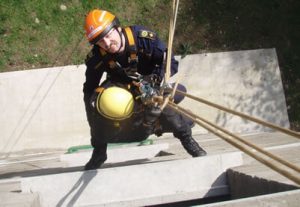 So why don’t rope access/rescue specialists use them for every task? Hopefully because they understand the principles of dynamism that allow for a different set of choices, so long as the dynamism is available elsewhere. This is afforded in a couple of ways. One; operators may be attached to a well positioned quantity of rope with sufficient inherent stretch, or, Two; they may be able to connect to a security point at chest-level or above.

The rope options may encompass ascent or descent, operator controlled or otherwise. They could include the provision of a rope and travelling “lock” system protecting the ascent of ladders or steel structures. 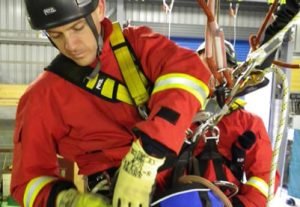 Those simply connecting to a high well placed security point, are able to use short lengths of dynamic rope. Tests (Lyon) have shown that these can be constructed with knots rather than any kind of neat looking sewn termination because they outperform them for bounce. The less obvious advantage of these skinny bits of rope is that it is easy to carry three, permanently fitted. So the more complicated the manoeuvre the greater versatility and system redundancy. The more complex rope access manoeuvres are, the simpler the connection systems need to be to avoid confusion.

The increasing prevalence of cam-adjusted connectors simplifies basic work, enabling operators to micro-adjust their equipment. But over-reliance on these new systems at an advanced level can generate complex and bulky rigging systems on which it is harder to carry-out pre-use safety checks. A balance must be struck after the full range of possible uses are taken into account.
Whilst much of the focus in rope rescue training is on the safety of “rescue loads” (rescuer and casualty), half of the work entails the management of edge safety for those positioned on building roofs and natural cliff tops. In theory they could be protected with a single-rope restraint system, but a realistic analysis of their role would suggest a progression to “doubled-up” work positioning systems, allowing them to take greater advantage of their position as communicator and edge manager. (This is an example of a situation dictating a step up from minimum standards)

Clear as mud? It’s a complicated business, a developed understanding of the principles and full compliance with guidance and legislation being a work in progress. If anyone is in doubt then they should perhaps default to full-blown fall-arrest lanyard systems. Mind you – if they are in doubt – they probably shouldn’t be up there!!