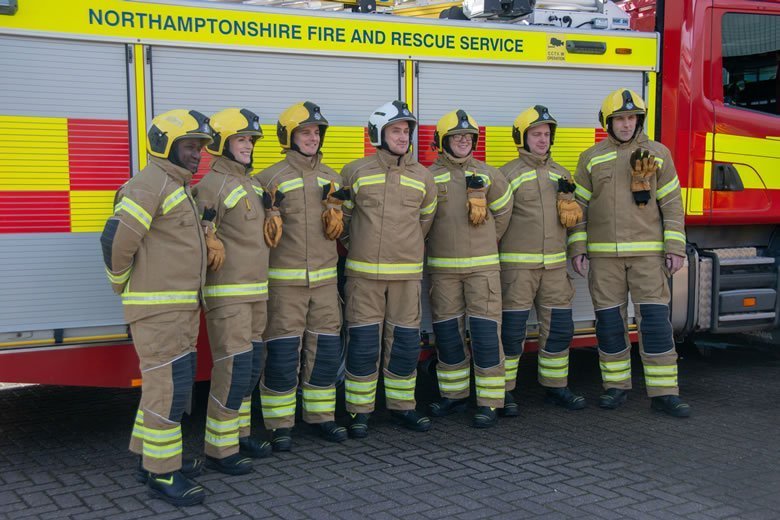 The future looks bright as Bristol Uniforms Supply New Kit for Northamptonshire Firefighters – they can now be seen out and about in new, gold-coloured fire clothing – the first major change in kit the service has seen in 15 years.

Firefighters will be saying goodbye to their old, dark blue kits, which first came into service in 2004, and will now don lightweight gold PPE (personal protective equipment).

The new kit is a lighter, modern design aimed at protecting firefighters from heat penetration, as well as maximising their freedom of movement when carrying out rescue duties.

The kit is being updated because of the age of the current blue PPE, so the decision was made to take on new clothing that utilises modern fabric technology and design.

Chief Fire Officer Darren Dovey said: “If you stop to think about all the different aspects of a firefighter’s job, which can include everything from dealing with a fire, to carrying out a rescue at a road traffic collision, the design of PPE is extremely important.

“I am confident this up-to-date new, lighter kit with its fresh, modern design by Bristol Uniforms, will positively impact firefighters’ wellbeing. If they can carry out their daily work feeling safer and more at ease in what they are wearing, that is a real change for the better.”

The kit, including fire boots, structural firefighting coats, overtrousers, gloves and fire hoods, has been specially designed to create something called an ‘XFlex silhouette;’ the aim being that it will fit equally well on different body types.

The PPE, which is already being worn by London Fire Brigade and Buckinghamshire Fire Service, includes an outershell fabric, a moisture barrier and thermal lining, designed to keep the heat of a fire from penetrating through the suit.

A lighter colour, with reflective strips, one of the benefits is that signs of dirt such as soot or other contamination can be spotted much more quickly.

Northamptonshire Fire and Rescue Service has entered into a ‘fully managed service’ contract with Bristol Uniforms, who not only manufacture the kit but will also launder and maintain it as part of the deal.

Stephen Mold, the Police, Fire and Crime Commissioner, said: “Firefighters are expected, on a daily basis, to enter into often extremely dangerous situations and help people who can be frightened and vulnerable.

“These new garments mark a significant investment and will equip our firefighters with the next generation of comfortable and effective kit. This new kit meets the best professional standards and if it helps to keep them safer in the challenging situations they find themselves in, then the investment has to be money well spent.”