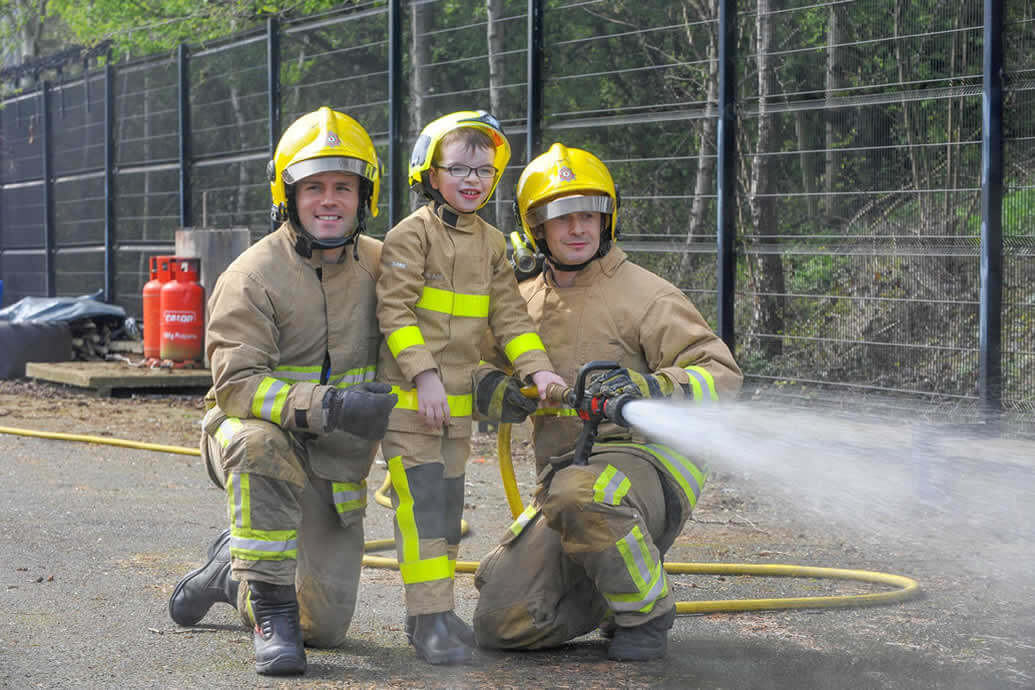 A young boy from Northern Ireland was granted his wish to be a firefighter, with help from the UK’s leading manufacturer of protective workwear.

Nine-year old Samuel Hawthorne spent a day with the Northern Ireland Fire & Rescue Service, and Stockport-based Ballyclare Limited provided him with a tailor-made firefighter’s uniform to wear on his big day.

Ballyclare was approached to help Samuel by Make-A-Wish® UK, the charity that grants magical wishes to enrich the lives of children and young people fighting life-threatening conditions. Samuel was diagnosed with Coffin–Lowry Syndrome shortly after birth. There is no treatment and there is a chance Samuel will deteriorate as he gets older, but he has speech and language therapy and physiotherapy to help with his development.

“Make-A-Wish arranged for Samuel to spend a day at a Belfast fire station,” explains Ballyclare Managing Director, Carlton Greener. “It was important that Samuel looked the part and felt like a real member of the firefighting team so we were delighted to help out.”

Ballyclare made Samuel a bespoke version of the Structural Firefighter tunic and trousers which it supplies to fire brigades throughout the UK. “These garments offer real firefighters a high level of protection in the dangerous tasks they face, and so Samuel was ready to face whatever his big day threw at him,” adds Carlton.

Samuel spent the day with the firefighters, carrying out equipment checks, taking part in drills and displays and he even got to sit in a Fire Appliance! Joanne Micklewright, Director of Wishgranting at Make-A-Wish, said: “We’re very grateful to Ballyclare who helped us make this wish come true. Samuel’s uniform was perfect and helped make the whole experience even more special.”

Samuel’s Dad, Mark, said: “Samuel had so much freedom on the day – it was great as parents to see him have free run being a Firefighter and it meant we could just relax and enjoy it too.

“It brought tears to my eyes seeing the pictures afterwards and thinking back on how great everyone was. We all have lovely memories to look back on.”

Picture caption: Stockport-based protective workwear manufacturer Ballyclare Limited provided nine-year old Samuel Hawthorne with a tailor-made firefighter’s uniform when he was granted his wish to be a firefighter, thanks to the Make-A-Wish® UK charity and the Northern Ireland Fire & Rescue Service.