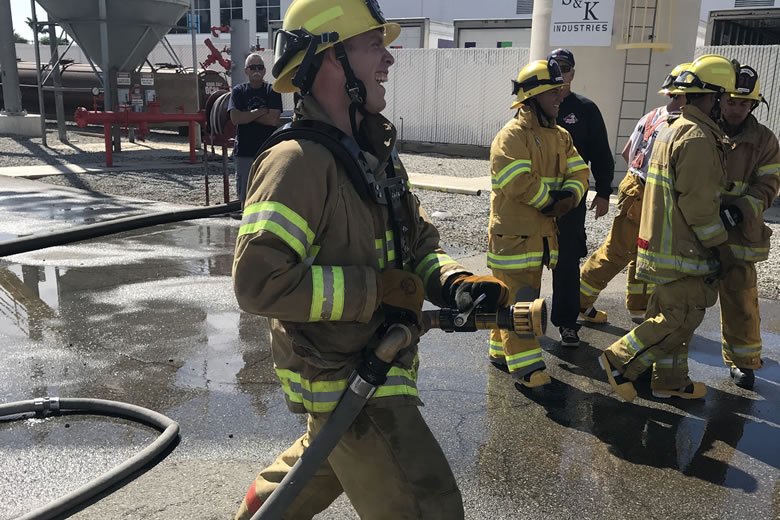 The Fire Hose Carrier aka Aqua Blaster is a fire hose and harness combination that allows a charged fire hose to be operated and managed with minimum or zero stress on the back and joints of its user.

The constructed design and mechanical function of the Aqua Blaster will allow both the fire hose and nozzle to be easily maneuvered and controlled due to a dual elbow swivel plumbing component that’s mounted on the belly plate of the harness frame.

The harness frame is also constructed with a locking clamp device that will lock the nozzle elbow swivel in various angles even allowing the nozzle to be used hands free when opened and discharging water or other agents.

The Aqua Blaster’s purpose is to allow a single user to use a fire hose without becoming overly exhausted and reducing the probability of injuries that’s associated with using fire hoses even when used for an extended period of time.

This could be ideal in firefighting scenarios where there could be limited firefighters on site and a need to carry out multiple tasks simultaneously. The Aqua Blaster would also benefit other industries that require the use of fire hoses for a specific task.

Even private citizens that have equipment like pool side fire hose pumps for property damage control situations in protecting their property in wildfires could incorporate the Aqua Blaster where bodies of water may be accessible.

The Aqua Blaster is a harness/frame which supports a fire hose with attached nozzle and can be operated by a single firefighter.

The firefighter’s torso and lower body strength give enhanced control of the fire hose and nozzle. Advancing and maneuvering is done without assistance.

Fire hose can be maneuvered hands free. Hands free operation is more balanced. The user can brace themselves while walking or advancing the hose.

The Aqua Blaster reduces injuries like chronic pains in the joints and back that are often associated with the long-term use of fire hoses.

The Aqua Blaster is supplied without nozzle. Some nozzles may require a 1 1/2″ Female NH/NST to 1 1/2″ Male NH/NST adapter to provide clearance for the nozzle handles. These are available from fire equipment supply vendors.

The Aqua Blaster Reduces fatigue when a charged fire hose is being used for an extended period of time.

Both elbows have a 150-degree range of rotation. One elbow is equipped with a fire hose adapter coupling. The other elbow accepts the fire nozzle of your choice.

The Aqua Blaster allows the user to easily pivot to the left or right adjusting the direction of the water stream. The fire nozzle can be rotated up and down and locked at a fixed vertical angle.

Agents including water, foam concentrates, gels, dry chemicals, or any other agent that is used with fire hoses and nozzles can be used with the Aqua Blaster.