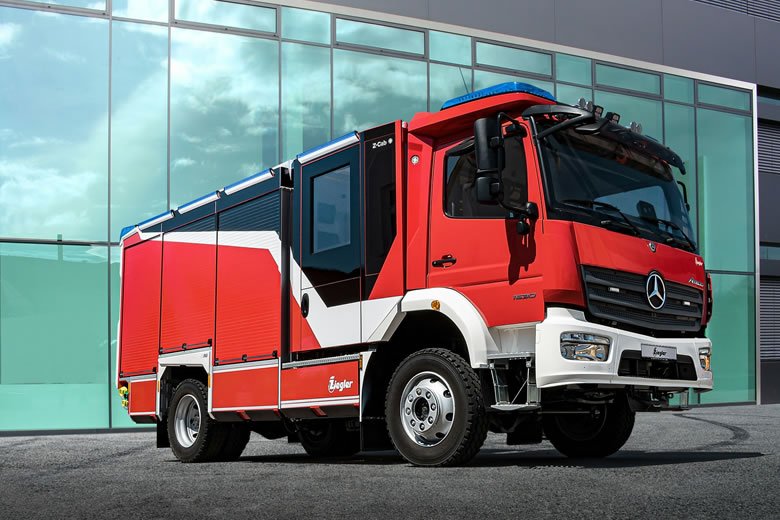 The third generation of ALPAS bases on our experience with thousands of vehicles since 1998.

Supporting structure, outer vehicle shell and shelving system in one – lightweight and yet extremely robust, long-lasting and sustainable.

Space optimized to handle the maximum load – comfortable andergonomic unloading thanks to a low and continuous step height.

Flexible interior installation infinitely adjustable – the vehicle can be adapted later on for updated firefighting equipment.

High design quality with continuous lines. Harmonious and modern appearance on all chassis. Tidy and clean structure.The new ALPAS is uniform across the entire vehicle fleet from MLF to Z-Class.

What does ALPAS mean?
The patented Aluminum-Panel-System ALPAS is the base of every ZIEGLER superstructure – a perfect example of the ZIEGLER philosophy of quality. ALPAS has been constantly developed and is said to be one of the best superstructure systems of the industry. ALPAS is characterized not only by its extreme flexibility but through (value) stability and longevity in particular. Firefighting vehicles with ALPAS superstructure are absolutely reliable tools for every operation.

From 1998 until now: more than 20 years ALPAS
ALPAS was patented and implemented to the firefighting industry in 1998. In the vehicle construction forfire departments, this can be described as a revolution. The ALPAS structure system has established itself on the market and has become a benchmark over the following 20 years. After the market launch, some competitors also tried to produce similar systems for the structure of fire-fighting vehicles – but ALPAS is still unsurpassed. ZIEGLER is so convinced of quality of ALPAS, that the company even offers a 12-year additional guarantee for the structure. This is a unique offer in the sector.

If the product is so excellent – why does it have to be improved?
ZIEGLER promises a consistent development and improvement of the products. This assumes that even successful products and systems will be constantly questioned and continuously improved. ZIEGLER has not even stopped at the proven ALPAS structure system and therefore ALPAS improved for you.

How was the development process of the new ALPAS?
By continuous calculation and internal as well as external test methods, the development process was accompanied. Among other things, virtual simulations that correspond to the state-of-the-art were used. According this, ALPAS has been developed with the newest and latest technologies.

In order to test the prototype under realistic conditions and receive realistic results, ALPAS was also subjected to various physical tests. At long-distances routes and various testing grounds, ALPAS was pushed to its limit. Not only the material properties, the stability and the durability were tested, also all possible vehicle and structure configurations had to pass tests. In addition to fulfill customer requirements, ZIEGLER also focused to exceed the current national and international standards. This means that users and customers receive a tested and certified structure system that has passed all tests with distinction.

Of course, the latest generation of ALPAS has several advantages over the previous ALPAS.The following 10 points clearly shows those advantages:

10 reasons for the latest generation of ALPAS

Panel – Aluminum – light and sustainable
The material without alternatives for stability, lightweight construction and corrosion protection

Assembly without drilling
Channels on both sides, called load paths, allow stepless mounting inside and outside the superstructure without drilling. A conversion by the customer is possible at any time

As stable as the tough everyday work demands
Many years of design experience, computer cal-culations and measurements under real conditions ensure excellent stability.

Long-lasting
After the panels are cut to size and drilled, they receive an extra strong 20 μm anodizing treatment. This provides long-lasting protection against scratches and corrosion. Sealed cutting edges provide a 12-year guarantee on the ALPAS superstructure. Even after a long time, aluminum is recyclable and therefore sustainable.

Weight savings of up to 30 % compared to the previous superstructure
Up to 10 % more space in the superstructure due to protected arrangement of the roller shutters on the roof
Increased load capacity and arranged 100 mm lower – the new steps ensure even more ergonomic load removal and are all at the same height. Stable and safe against slipping and stumbling.

Other products by ZIEGLER