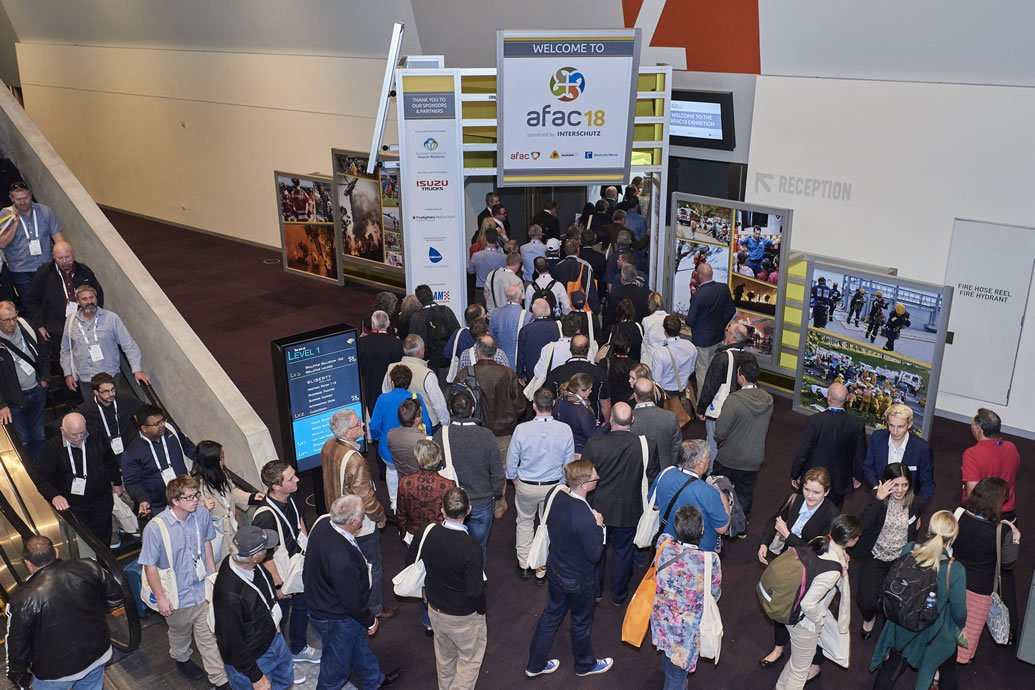 The lead theme of AFAC18, “Changing lives in a changing world”, proved to be well chosen, with nearly 3,000 visitors from 25 countries attending AFAC18 powered by INTERSCHUTZ in early September. A keen audience of professionals seized the opportunity to discuss the current challenges facing emergency management and public safety, as well as to discover the latest products in this area. Deutsche Messe, working in partnership with the AFAC, has brought its extensive expertise in tradeshow management to the event. The AFAC thus also serves as an international offshoot of the world-leading trade fair INTERSCHUTZ staged in Hannover, Germany.

Australia’s leading exhibition and conference for emergency management and public safety returned to Western Australia’s capital city, Perth, for the first time in six years. A total of 170 companies used the opportunity to showcase their products and services to interested professionals. Several of the 44 exhibiting companies from outside the host nation were from Germany or Austria.

For the first time ever, there was a German Pavilion at the AFAC, sponsored by the German Federal Ministry for Economic Affairs and Energy (BMWi) and organized by the German Fire Prevention Association (vfdb). The companies that took part in the pavilion commented favorably on the joint display and reported numerous promising business talks. Participating companies were Alro Engineering, askö, the GFPA (German Fire Protection Association), Haix, Jakob Eschbach, protectismundi, Luitpold Schott, VTI Ventil Technik, the Wagner Group and Zapp Zimmermann. The German companies present with their own stands were Rosenbauer, Bauer Kompressoren, Dräger Safety, ESKA, the LHD Group and Mercedes Benz.

The Perth event also featured a high-caliber conference program organized by the Bushfire and Natural Hazards CRC Research Forum. For the first time the AFAC Conference was staged together with the Australian Disaster Resilience Conference. In the parallel exhibition, participating companies not only showcased their latest solutions in emergency management, but also offered live demonstrations. Highlights included simulated accidents and emergency incidents as well as the use of robot technology – for example, explosion-proof robots for firefighting applications.

AFAC18 powered by INTERSCHUTZ was positively received by the professional visitors. At the close of the event as many as 84 percent said they would recommend it to others. In fact, this response was even higher among conference participants, as 97 percent stated that they would recommend it to their colleagues. The exhibitors were also satisfied: 88 percent rated the whole event as “very good”. One factor that may have influenced the positive response of the exhibitors was the high proportion of decision-makers (70 percent among the visiting public).