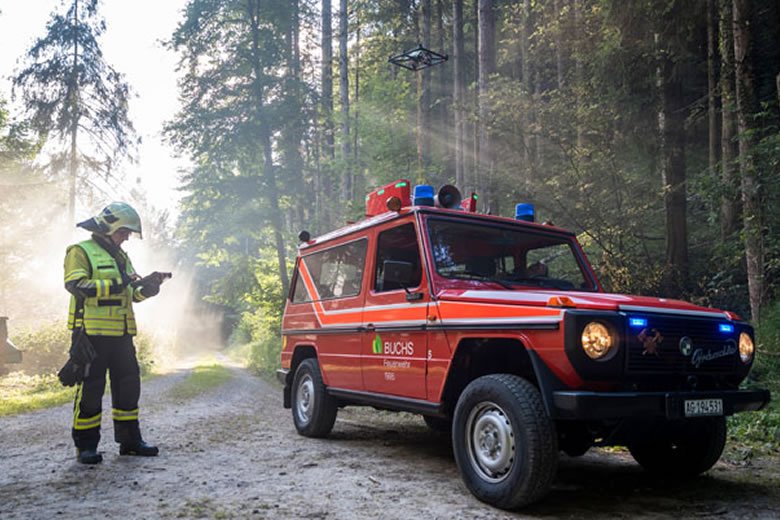 The Fotokite Rooftop configuration integrates directly into the roof or roof rack of SUVs and Public Safety vehicles, allowing rapid and effortless deployment of thermal and low- light video intelligence during the first critical seconds, minutes, and hours of a response. This provides unprecedented size-up capabilities with a bird’s-eye view of incidents within 15 seconds of arriving on scene.

The Fotokite Sigma gives teams actionable intelligence throughout their everyday missions and unlocks the ability to capture full incident response records without interruption. The Rooftop is one of three Sigma product configurations (which additionally includes a rugged Transport Case and a Tray Mount configuration). The systems equip any first responder team with an autonomous vehicle-integrated aerial camera system , directly available from their vehicle without the need for piloting.

Fotokite Sigma and its configurations are built with numerous safety redundancy features, such as high-wind detection and stabilization capabilities, back-up autopilot and power systems, a light-weight fully carbon fiber frame, and GPS independence, making it a safer and lower training threshold option for departments to gain aerial intelligence at their emergency scenes. Some of the system capabilities include:

● Safety first, no joysticks or piloting needed
● Fully autonomous flight means you do not need a dedicated pilot, active piloting, or pilot training
● Ruggedized IP55 System suitable for use in rain, snow, and windy conditions
● 24 hours of continuous situational awareness, accessible with the single press of a button

For marketing or sales related queries, please reach out to your country’s distributor or email us directly at sales@fotokite.com.

● Brandschutztechnik Schlichtiger in Germany
● Intellitronika In Italy
● Groupe Desautel in France
● Growag in Switzerland
● Emergency One in the U.K
● Excelerate in the U.K
● Primetech in the U.K