A simple look at Bus Construction and the hazards we face 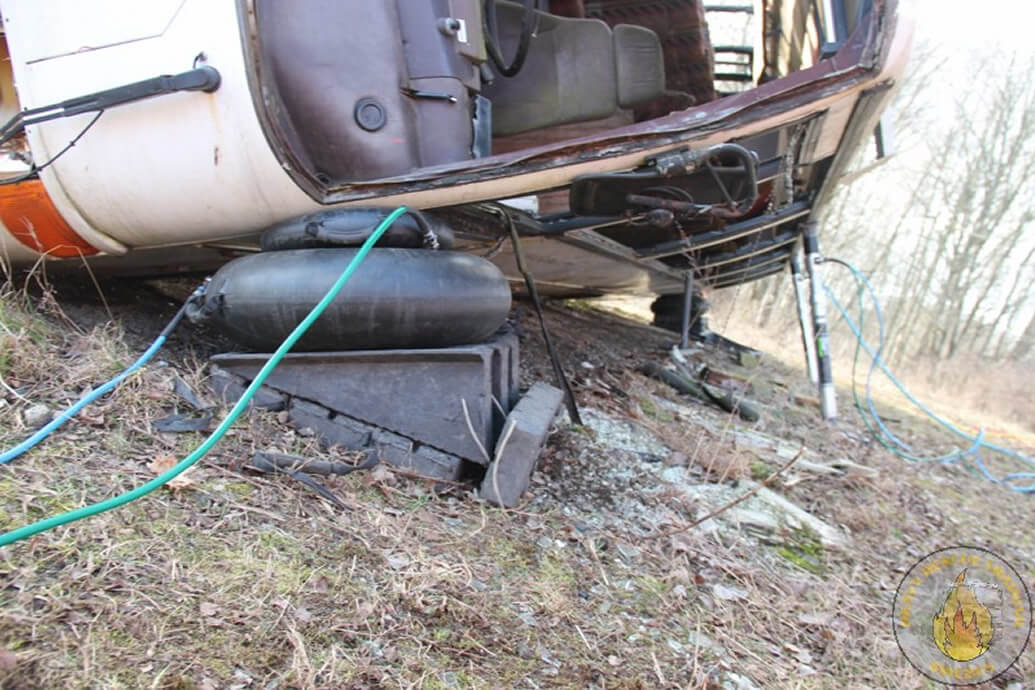 For most of us dealing with RTC’s involving cars is a relatively run of the mill job, but what do we do when the incident involves a Bus? What knowledge do we have of dealing with Bus rescue and making such an incident safe, do we know where the cut off switches are? In this next section we are going to look at some basic Bus rescue techniques and shut down procedures.

Remember we are just looking at Bus techniques so please do not get to concerned about the other vehicle at this stage.
On arrival what are we thinking about, after the casualty etc we will need to isolate the Buses systems to make the Bus safe to work on or around.
Is the engine running? If so we will need to turn it off. Most buses do not have keys so there is a button on the vehicle dash that we need to push or turn to turn off the engine.

If due to crash deformity to the cab area the switch is not accessible all buses will have an emergency cut off switch at the rear of the vehicle or on the side at the rear.

Once you have opened the hatch there is a simple isolation button that locks, so once activated the engine can not be restarted until it has been reset.

Buses are not fitted with SRS systems or seatbelts so there are no issues with safety systems, however the risk of fires is still a hazard.

-All buses will normally have a cut off switch in the cab on the drivers console, it will be either a push button or a key which you can turn and remove, and this will isolate all electrical systems.

-However hazard lights and security cameras will still have power, however these pose very little hazards for rescue actions

Some buses will have the battery and engine isolation switches in a side door near the rear of the vehicle that will be marked as you can see in the picture.

Stabilising a Bus is a simple task utilising step chocks and blocks and wedges as standard, buses have several areas under the chassis that are strong points for stability or lifting with jacks or airbags.

A point to bear in mind

If there is a casualty trapped under the bus then it will require localisedstabilisation around the casualty before you switch off the engine. The suspension WILL not drop when the engine is turned off.

The doors do not need power to be opened in an emergency; they are normally powered by air. If the air has been depleted, the door will open easily with a push in the marked area.

If the system has air in it, you can just push the emergency door release button.

However with door system charged with air there will be a need to secure the door open as it will try and self close. The rear doors normally open with just a handle using the guidance on the door.

The glass on the front of buses is always laminated; also the small side panels near the front will also be laminated glass that is bonded. Some older buses the glass will just be held in by a rubber gasket.

Passenger side windows will be toughened glass and can be dealt with in the same way we do cars, with a center punch and so on. The glass can also be removed whole by removing the gasket and then peeling out the rubber, the window should be removed in an outwards direction from the bus.

Buses are mainly constructed from box and Ali framework coated in Fibreglass for looks. There are no real problems with extrication techniques due to their light construction. Most cutting can be carried out with a recip saw, however this you will have to draw your own conclusion through training.

The diesel tank is normally fitted in close proximity to the driver’s compartment and sometimes under the stairs on double deckers.

Space will be at a premium during a major bus incident with mass casualties so routes in and out of the bus will need to be planned and good tool use monitored. Seats can be cut free with either a recipe saw or hydraulics, as they are fitted with a simple steel tube or bracket.

When removing side panels on a bus or coach we will come across strengthening bars within the side panels, we will need to find their location to assist with cutting operations by using tools such as zip guns etc Trying to fold the panel down against these side bars will prove very difficult.

Article and images courtesy of John Curley from http://rtc-rescue.com/