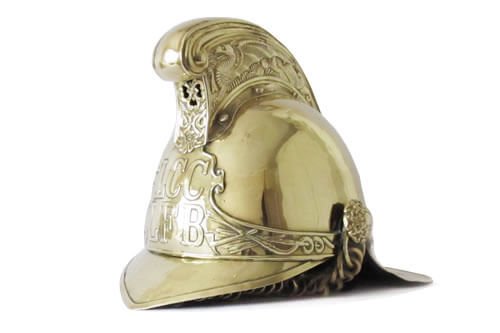 Since 1866, 16 different styles of helmets have been used, ranging from the first leather helmet design through to the iconic brass Metropolitan Fire Brigade (MFB) model and the yellow cork helmet.

Inherited from the London Fire Engine Establishment (LFEE), the leather helmet was worn between 1866 and 1868 before being replaced by the brass helmet.

Based on the French 1862 fire helmet – but with a considerable redesign – the brass fire helmet was introduced by the MFB in 1868.

Although it was Chief Officer Massey Shaw’s intention that it should be unique to the MFB, the helmet was adopted by almost all the British fire brigades and became an iconic symbol. Designed to be lightweight, well ventilated and constructed in sections so it could be easily repaired. It is thought the distinctive dragon emblem, which decorates the central comb, was designed by Shaw’s daughter, Anna.

The helmet was in continuous use until 1937/38, making it the longest serving helmet in Brigade history.

In June 1934, we trialled a completely new concept in fire helmets.

Made of compressed cork and rubber, the cherry red fire helmet proved to be very unpopular with firefighters and, in doing so, became one of the rarest Brigade helmets of all time.

A further trial in 1935 and 1936 saw a black cork and rubber helmet being tested.

It would appear this style also proved unpopular with firefighters and yet another redesign was called for.

Introduced throughout 1938, the ‘gold comb’ fire helmet replaced the famous brass helmet once and for all.

Although in use for only three years, it set the general shape and style for Brigade helmets for many years.

Issued to all regular Brigade firefighters in 1939, the Mk2 steel helmet was originally painted red, however, this made them conspicuous from the sky and the helmets were repainted khaki with a 2 inch (50mm) red band.

The wearer’s station number was painted above the badge and there were no rank markings on the helmets.

Senior officers were identified by a silver badger instead.

Issued to all ranks of the London Auxiliary Fire Service (AFS), the Mk2 steel helmet was painted battleship grey.

It had the wearer’s station number painted in white on a black background above the AFS badge.

In August 1941, all fire brigades in the United Kingdom were amalgamated to form the National Fire Service (NFS).

Among many other standardised items of equipment, all steel helmets were repainted khaki with the NFS badge and the relevant fire force number, in a disc shaped transfer, on the front brim.

The NFS issued an order in 1947 allowing the use of pre-war fire helmets again as long as they were not brass.

They had to be painted black all over and carry the NFS badge.

The fire forces covering the old LFB area were issued with the pre-war cork helmet but with the ornate ‘gold stepped comb’ painted black and the embossed LFB badge removed.

Subsequently on the disbandment of the NFS, the Brigade adopted this helmet but with the London County Council star badge transfer.

Introduced around 1957, the Cromwell ‘LFB Pattern’ 2010 helmet carried on the ‘stepped comb’ of the previous style of helmet but with a lower profile.

It became synonymous with the Brigade and continued in service well into the 1970s.

Much cherished by firefighters, many were painted yellow when the new regulations for helmets came into force.

Also introduced in 1957 was the Emegency Tender (ET) crew helmet.

They were carried on the Brigade’s two ETs as an alternative to the normal fire helmet.

They were particularly helpful when personnel were working in sewers or confined spaces.

It was used exclusively by ET crews until the early 1960s.

The F135 helmet was widely used by many fire brigades throughout the country but was soon superseded by the yellow fire helmet.

Complying with Home Office requirements in 1974, all black fire helmets were repainted yellow.

Soon after this the Brigade began to issue yellow fire helmets to replace all earlier patterns.

This style of helmet continued in service for almost 15 years.

Issued in 1990, the Pacific fire helmet was made in New Zealand.

It was made from glass fibre and Kevlar.

The helmet remained in use for almost a decade until it was replaced by the Cromwell F600.

The Cromwell F600 fire helmet was a great step forward for the Brigade.

The full enclosed helmet had a deep visor, which offered complete protection to the head.

The current helmet used by the Brigade is the MSA Gallet F1.

Designed in conjunction with the Brigade de Sapeurs Pompiers de Paris (Paris Fire Brigade) in the early 1980s, this very popular helmet has been put into service by fire brigades worldwide.

The brief history of Fire Helmets article was adapted from https://www.london-fire.gov.uk/